You'll be ready to use "Iron Tail" or "Ray" with this Pikachu Pokemon costume for a woman.

Pikachu is the most famous pokemon (fictitious creatures with different features) of the story, since he is the companion of the protagonist of the series, Ash Ketchum, and the representative mascot of the franchise. Pokemon is a franchise that began as a video game whose mission is to capture and train the Pokemon. 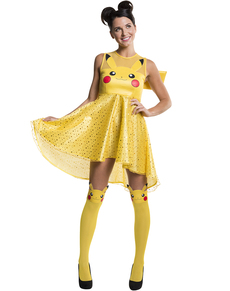